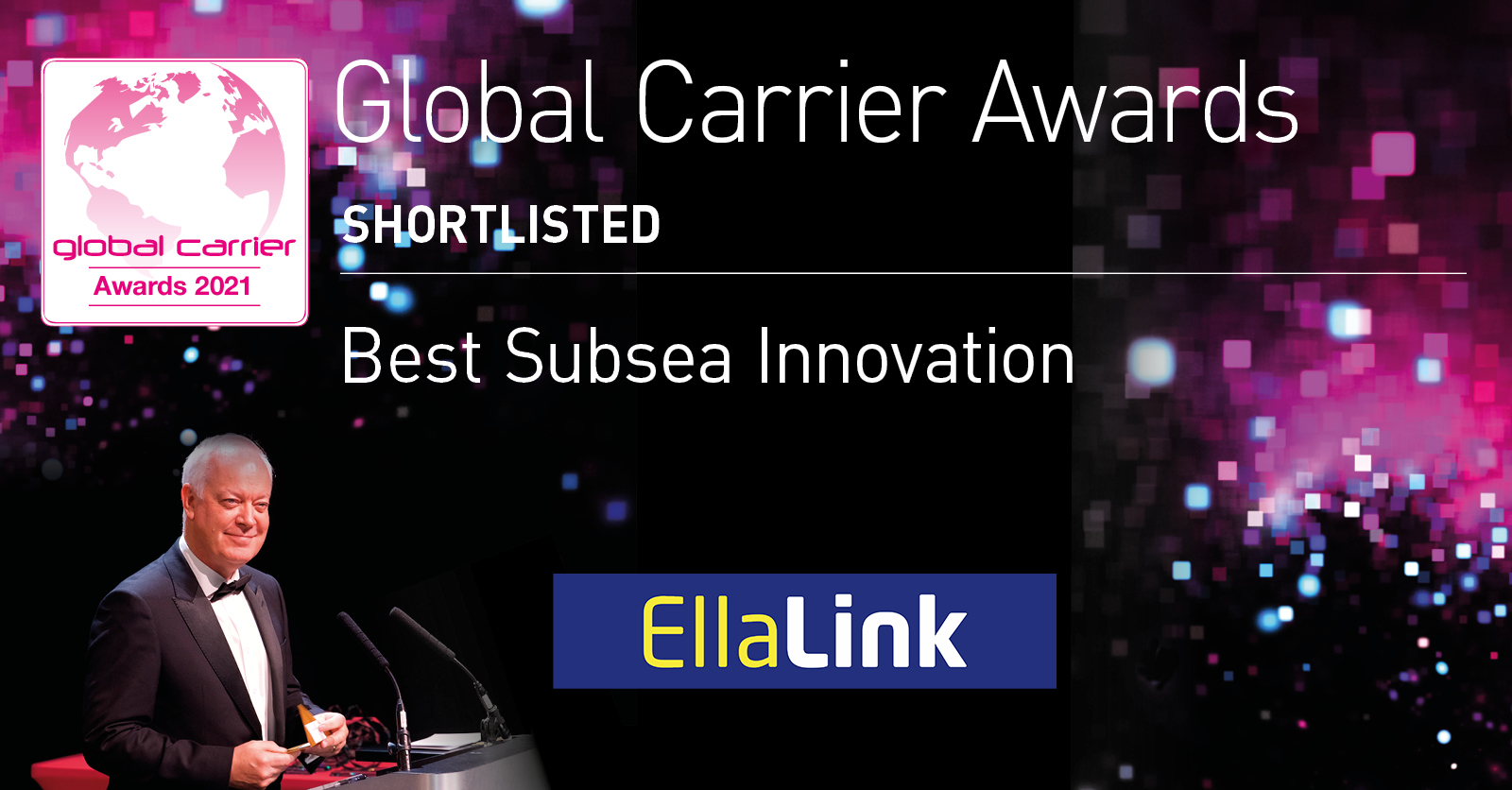 This year EllaLink has been shortlisted for two categories at Global Carrier Awards: Best Subsea Innovation and Best Marketing Campaign.

The submission for Best Subsea Innovation aims at achieving recognition of the commitment of GeoLab: An initiative to unite the scientific and telecoms communities for the greater good and it is the world’s first commercial telecoms system to incorporate SMART (Science Monitoring And Reliable Telecommunications) cable concept.

For the Best Marketing Mampaign the key topic of the submission are the EllaLeaks video series that has, since its inception been a remarkable marketing tool, allowing followers, customers and colleagues across the globe to keep track of the key milestones throughout the construction of the EllaLink network.

EllaLink and its partner EMACOM first started discussing the idea of the EllaLink GeoLab several years ago. Our goal was to find an innovative way to bring together existing concepts and resources to obtain data which would support climate monitoring and disaster mitigation. That’s how GeoLab’s project was founded.

Deployed on the Madeira Branch of the EllaLink system, GeoLab initiative aims to provide the scientific community with real-time, accurate and relevant data on seabed conditions along the EllaLink cable route. This will allow accurate information on seismology, volcanology, marine ecology, and oceanic conditions, which are key elements to understanding the future of our planet, to be collected simply by adding sensors into the undersea telecommunications cables.

It is in everyone’s interest to further understand the evolution of the planet and the more data that can be collected from the seabed the better.

EllaLink’s entire ethos is based around openness and partnerships, and we see how commercial enterprises working together with the scientific community can be of benefit to all. We hope to create a new industry standard of future submarine cable systems incorporating SMART cable concepts in innovative ways.

EllaLink is more than a cable.

The EllaLeaks series has been a successful key to keep in touch with our followers, customers and colleagues across the globe to celebrate special moments and achievements at a time when we were not able to meet each other in person. We’ve made those videos to break the rules and proudly share all the details about our building process, our progress and achievements for everyone to have a better understanding of all our projects. The audience can learn openly and freely how submarine cables comes to life, from the project conception to its conclusion.

Throughout the construction of EllaLink, the EllaLeaks videos were a much-anticipated piece of marketing, which viewers looked forward to every month. The team managed to keep the topic of each episode a surprise and a vast variety of content was created, from interviews with a ship’s captain to underwater survey footage from the Ceará Plateau.

EllaLink’s marketing material attracted attention from several different sectors, both private and public, which culminated with extraordinary recognition from senior members of the highest authorities in both Portuguese Government, the Brazilian Government and the European Commission. It was a great honour that Mrs Ursula von der Leyen proclaimed that “EllaLink is more than a cable”, and to have senior leaders brought together at the EllaLink system inauguration event in June 2021. The event, which was held in Sines, recognised the relevance and importance of having a direct telecoms connection between Europe and Latin America.

Currently, we have 2 seasons with 22 specials episodes covering topics ranging from the route survey, the construction of the Sines Cable Landing Station, shore end landings in Madeira, Cabo Verde, Fortaleza and Sines, to, associated initiatives such as the EllaLink GeoLab and testimonials from our key partners.

Watch the EllaLeaks episodes and follow the EllaLink Channel to receive other news in first hand.