New research presented by EllaLink, DE-CIX and Interxion and carried out by TeleGeography highlights Madrid's importance and position on the Internet map, bringing together exchange points, data centers, the cloud industry, and connections with the main submarine cables of the Peninsula through Bilbao and Lisbon.

Lisbon - EllaLink, DE-CIX and Interxion, have commissioned TeleGeography to develop the study “The Interconnection Landscape in Southern Europe“, which analyzes how the expansion of data centers, the growing presence of cloud operators, new submarine cables and IXs are turning the Iberian Peninsula into a strategic interconnection region.

Internet access demand is on the rise and, accordingly, so are the reliability, speed and interconnection requirements demanded by users, which makes it necessary to continue working on improving Internet infrastructure. Reducing network latency by bringing digital applications and content closer to the end users is one of the main focuses of the industry. This is the challenge the Iberian Peninsula is facing for the development of the Internet of the future, as a converging point of the data traffic between Europe, the Americas, Africa, the Middle East and Asia, with a huge growth potential for both private and enterprise users.

Madrid, at the heart of the Internet ecosystem in Southern Europe

Since 2016, Southern Europe's bandwidth has experienced a year-on-year growth of 30%, multiplying its capacity by almost 2.75 in this period, reaching 150 Tbps of capacity between all territories. One of the most impressive developments has been Barcelona, which has grown by 35% during this period and now has a bandwidth of 5 Tbps. Madrid, for its part, grew by 18%, with almost 15 Tbps.

Data centers are the housing that shelters and supports the world’s interconnection fabric, and Southern Europe has seen significant investment in this critical infrastructure over the past five years. According to TeleGeography’s figures, the number of colocation data centers in the key metropolitan markets across Southern Europe has increased 19% since 2016 to 56 sites as of 2020. An example of this growth is Madrid, which has presented continuous activity, accumulating 25% of the data centers in the markets analyzed in Southern Europe, and 98,000 square meters of colocation space in 2020.

“Madrid is attracting considerable investments to deploy data centers” says Raquel Figueruelo, Marketing Director at Interxion, “Due to its geographical location, capacity and connectivity with the rest of the continent, we are seeing more and more players investing in Madrid to locate their data centers and cloud regions. This is the case for Interxion: we are already working to open our fourth data center in the capital, which will have 15,000 square meters and a power of 30 MW”.

Internet Exchanges are the fabric that weave together interconnection ecosystems and serve as primary building blocks of the Internet itself. As the demand for network connectivity pushes to increasingly localized places, so does the demand for distributed peering nodes. In fact, peering in Europe has changed dramatically in the last five years. According to TeleGeography, the number of locally based exchanges in Southern Europe has jumped 47% since 2016.

Indeed, since its opening 5 years ago, DE-CIX Madrid, the largest neutral Interconnection hub of the Iberian Peninsula by connected networks, has become one of the spearheads of this growth in the Southern European area, and will expand with the upcoming opening in Barcelona. Since 2016, the traffic at DE-CIX Madrid, which initially originated almost exclusively from Europe, is now showing 10% of traffic originating from North Africa. In fact, connectivity with this region has increased by 72% and with US & Canada by 69%. According to DE-CIX, Spanish local networks account for more than 60% of Madrid's connections, despite the continuous growth in international traffic.

TeleGeography’s research shows that we are also witnessing a surge in demand for access from cloud networks to Southern European markets. If we take a look at the Southern European region as a whole, in 2016, none of the cloud providers had created so called cloud regions at the time. By 2020, there were already two. In the next year or two, there will be at least eight, half of these based in Madrid, with the upcoming cloud region openings including Amazon, Google, Microsoft and OVH.

Barcelona is also a thriving interconnection point, with the upcoming opening of a new Internet exchange by DE-CIX, and the presence of three major data center providers to serve the important local demand of one of the top 10 cities in Europe by population and GDP.

Submarine cables are the infrastructure that feeds the continent's data centers and Internet Exchanges, with Internet traffic from the Americas, Africa, the Middle East and Asia. Southern Europe is currently connected to 45 submarine cables, 10 landing in Spain and 9 in Portugal, with another 6 in the process of being deployed. Half of these new cables will land on the Iberian Peninsula: Grace Hopper in Bilbao, 2Africa in Barcelona and Lisbon, and Equiano in Lisbon.

Among recent submarine cable deployments, the EllaLink cable connecting Latin America with Europe – the first to link both continents with a direct connection in order to boost this emerging market and connect it more efficiently with the old continent – stands out. With its access point to the peninsula in Lisbon, EllaLink will also allow, through Madrid, the reinforcement of the transatlantic connections to Spain, which in turn has connections in Bilbao with MAREA and Grace Hopper, the submarine cable announced by Google last year. Similarly, Barcelona will welcome its first international cable landing, with 2Africa.

“The deployment of submarine cables is one of the priorities to improve interconnection over long distances, especially to connect territories across the ocean,” comments Diego Matas, COO of EllaLink. “With the deployment of EllaLink we will be able to reduce latency drastically between Latin America and Europe, shortening the distances between both continents more than ever. We know that apps are considerably latency-sensitive and highly dependent on low latencies. The new improved latencies will reshape businesses’ IT delivery model between continents”.

These projects both bolster pivotal existing routes to the region and open new routes and opportunities for increasingly diversified and low-latency interconnection to be established. Furthermore, these new projects solidify the growing influence of international content and cloud investment in the region.

Ivo Ivanov, CEO of DE-CIX International, concludes, “The Iberian Peninsula is ready to meet the growing demand for interconnection and ready to become an essential hub for data traffic from the Americas, Africa, the Middle East and Asia. The increasing sophistication of digital applications and content requires an interconnection infrastructure that is as close as possible to the end users. This ensures the lowest latency possible – which is the new currency of our digital age – and offers the best digital experience to people and businesses. With our constantly new locations, we are increasing the IX density in Southern Europe and providing new services as well as the best interconnection possible”. 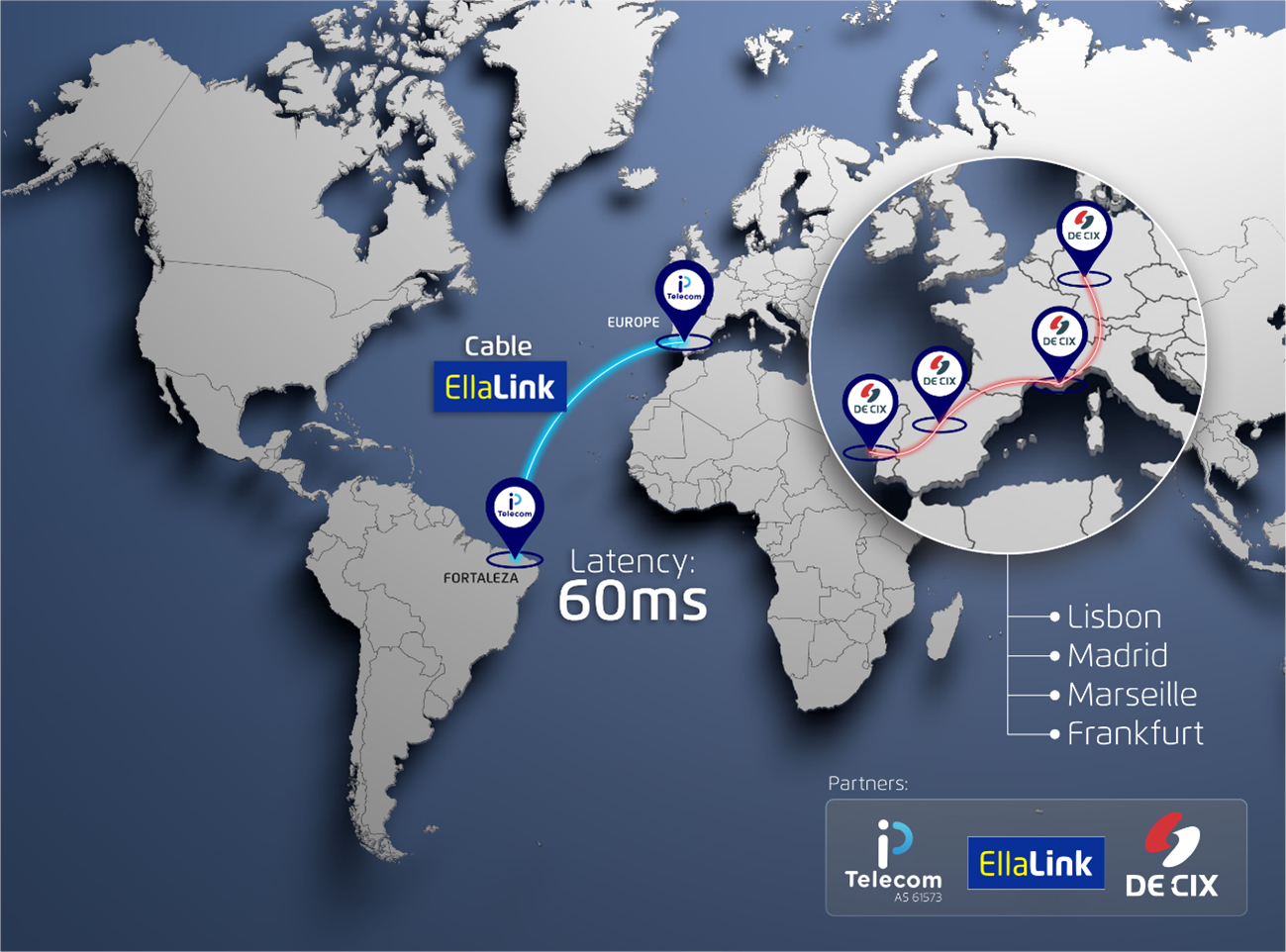